Penang was founded in 1786 AD by Sir Captain Francis of the English East India Company as the Prince of Wales Island. Postcard showed his statue and the cannon at Fort Cornwallis where the Union Jack was raised. Penang Island and later the mainland strip of Penang was ceded from the Sultan of Kedah. George Town grew into an important free port between India and China. George Town was granted City Status by Queen Elizabeth II. In 2008, George Town was listed as UNESCO World Heritage Historical City of the Straites of Melaka. Penang was part of the Straits Settlements with Malacca and Singapore and became part of Malaya and later Malaysia. The name Penang comes from the acreca nut palm tree in Malay "Pinang". Pulau means island in Malay.

Stamp used is the state emblem of Penang or Pulau Pinang. Postcard is mailed from Nibong Tebal and postmarked in Butterworth which are towns on the mainland strip of Penang. 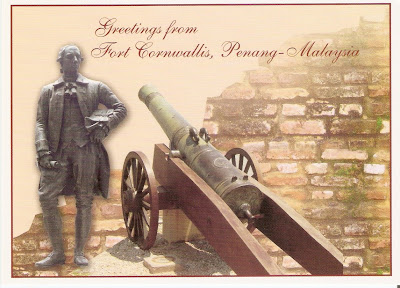 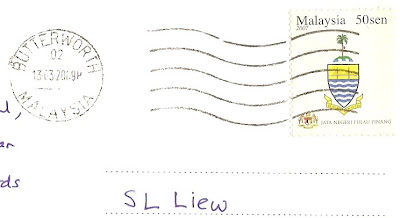